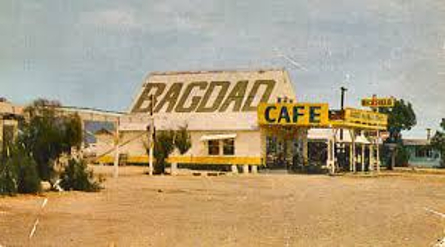 Percy Adlon’s first English-language film, “Bagdad Cafe,” a gingerly, happy little fable about a Mojave Desert oasis run dry. With its foibles and quirks, it’s something like a Sam Shepard play by way of the Black Forest. … The movie does seem to have been pulled from a hat, a series of surprises tossed off by Adlon and his producer wife Eleonore. The script grew out of the couple’s 1984 trip across the United States. Barstow, Calif., reminded them of purgatory. And of course, “Bagdad Cafe” is all about escape from limbo. Sagebrecht, who redefined sex appeal in “Sugarbaby,” is the most alluring full-figured girl since Jane Russell. She is an understated actress in an overstated body, enjoyable precisely because she is so peaceful and sweet. Like the rest of the cast, she was chosen for her eccentric style. It’s rather like the characters from “Sesame Street” doing an anal-compulsive western.https://www.washingtonpost.com/wp-srv/style/longterm/movies/videos/bagdadcafepgkempley_a0ca0f.htm

We invite you to join us via Zoom on March 17th at 7pm for analysis of “Bagdad Cafe”.  We have added a link in the pulldown menu under the Virtual Movie Club button to make it easier to participate in our discussions every month.

Check out the selected films for our theatre screenings too.  Subscribers are invited back to the theatre in March.